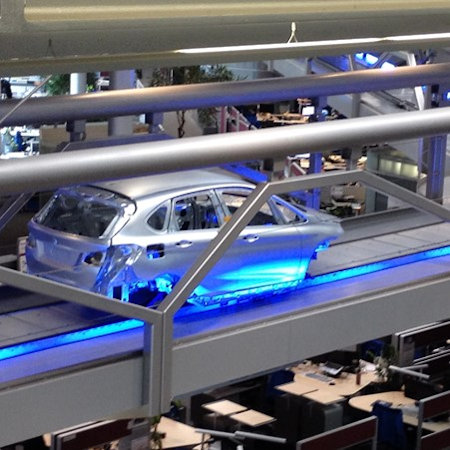 Mass consumption, or over-consumption has only been made possible by mass production, which – as we show – almost inevitably leads to over-production. As Sabel and Zeitlin (1985, 1997) have argued, mass production was never an inevitable outcome of historical developments in the late 19th and early 20th centuries; it was the result of specific choices made at the time. Mass car production can be seen as the archetype of modern mass production. Today it is dominated by large, centralized assembly facilities sourcing from world-wide networks of suppliers. However, it is clear that the present structure is closely linked with the adoption, by much of the car industry, of three interlocking strands of activity; in addition to the technological contributions by Ford and Budd outlined in the next chapter, there was also the crucial contribution by General Motors under Sloan that made a mass car market possible by essentially creating the demand for cars.

If mass production was the result of conditions specific to North America, why did it spread globally? Few observers today seem aware that this is not the only possible way to make and use cars. This is due to the fact that Budd-style car manufacturing has become closely integrated with the Fordist and Sloanist strands, although the additional, non-technological, socio-economic element of mass car markets and the resulting cultural and regulatory approaches should also be highlighted, making what some have described as a ‘socio-technical regime’ (Geels, 2002). These innovations prompted buyers to think of the car no longer as a single item bought for life, as Henry Ford had intended (Ford, 1924, 149), but as a product that needed regular updating and replacement. GM and Sloan are therefore crucial in this second, ‘consolidation’, phase. These innovations, and their manipulation of the market, allowed the supply-driven Ford-Budd manufacturing technologies at the heart of mass production to become firmly rooted for over a century.

Outside the US, the first car manufacturer to recognise the potential of Budd’s new body technology was André Citroën. Citroën ran into similar problems as Ford in that once mass production of mechanical components had been established, it was found that body construction and painting presented a major bottleneck preventing mass production of complete cars. Unlike Ford, Citroën shared Budd’s longer-term vision and could see that the high costs of maintaining forests was unsustainable. However, Citroën did become very reliant on US technology. As significant is that Citroën was first to produce a monocoque structure in volume production, but again relying heavily on Budd’s patents and technologies. American manufacturers, meanwhile had focussed more on styling and advances in production methods, as well as implementing much greater specialisation, such as plants making only a single model line, something European car makers with their much lower volumes could rarely afford to do without achieving minimum economies of scale.

The effect of the introduction of Buddism and Fordism on the French car industry was significant. The interwar period saw a major decline with the various economic crises and the introduction of mass production by some manufacturers, notably Citroën and Renault, taking its toll. The post world war II period saw a slight revival as plastics technology made some new small volume producers viable (Alpine, DB, Gordini, etc.) and an increase in demand allowed the luxury craft makers, such as Delahaye, Hotchkiss, Salmson, Talbot a brief stay of execution. From 1950 the final decline set in to the present handful of car makers in France. This effect was not limited to France. France has the world’s oldest car industry and therefore illustrates such trends perhaps better than most other industries. However, the spread of Ford’s mass production, supported by Budd-style body technology gradually moved around the world.

The paradigm of mass food consumption and production is constructed, legitimised and sustained through a paradoxical narrative of abundance (of cheap food at all times) versus scarcity (of time for individuals) within food systems. This has paved the way for the rise and domination of large food companies – from manufacturing, retailing, to restaurants - and of global food chains. What we see now are highly concentrated food systems, controlled and dominated by a handful of large players (McCarthy, et al., 2018). Lang (1999: 169) argues that ‘food systems and supply chains are the product of policy and political choices […] characterised by large scale concentration and centralisation, both politically and economically’. Food and agriculture are a key agenda for public policy and many governments across Europe and North America have so far nurtured the rhetoric of ever more available cheap food (otherwise they risk entering into the minefield of providing everyone with a decent income to afford food) and promoted the advancement of technology.

In recent years we have also seen a strong focus on the sustainability and future of food systems. Coupled with the narrative of ‘feeding a growing population’, this is an agenda which so far has been once again dominated by the large corporations and embraced the technofix paradigm. Much is written in terms of the environmental impact of agriculture, and particularly in relation to animals (see dairy and meat production). The emphasis is often placed on minimising the footprint of these activities – with accompanying technology – rather than truly challenging the premise upon which are food systems are based, i.e. overproduction to serve overconsumption. As such, the technology rhetoric is seen as appealing over the fundamental rethinking of our food systems. We see discussions of farming at gigantic scales, so-called ‘fermes de mille vaches’ (Vialorgue & Hollandts, 2019) to enable ever more efficiency and control over natural processes. The human/nature distinction is key here again to understand this: we treat everything non-human as commodified objects. The models make additional promises of less environmental impact but at what ethical cost? We also see proponents of food grown in the lab as the most sustainable future (see for e.g. Monbiot, 2020). These arguments, however, are often based upon flawed understandings of the energy provision requirements behind lab-grown food and of their socio-economic implications. There is a huge social cost in terms of how this would destroy farming and agriculture. The potential for even further concentration and oligopoly would be gigantic. The mass food production paradigm is one that seems very ingrained and difficult to move away from.